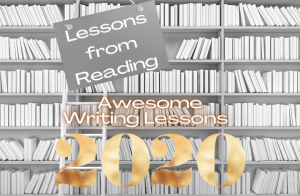 In a box somewhere there’s a stack of pencil-written pages bearing my first story. I was eleven or twelve, I was enchanted with The Chronicles of Narnia, and I wanted to write my own fantasy. Child protagonist—check! Aslan-style mentor—check! Magic trees—check! My own Narnia tribute was coming to life.

When I finished, I was happier than Larry! And my parents congratulated and encouraged me.

But … they also pointed something out. In one chapter, my protagonist received a bowl of beans, but he couldn’t eat them all. So, he took the bowl with him for later. I thought this was a really cool story idea, cause then I could have a grizzly bear smell the beans, chase my protagonist, attack him, and fill my story with danger and excitement just like Narnia! But little Matthew was getting too excited, too wrapped up in his story, and he thought of an adventure his character needed to have before the bear put him in a hospital bed. Then he thought of another, and another, and another … and he forgot about the beans! In fact, he never mentioned them again until he sprung his master-trap, unleashing his ultimate ravenous grizzly bear.

“Um, Matthew,” my mum said, “has he been carrying that bowl of beans …” she turned over page after page … “all this time?”

Slowly the enormity of my mistake dawned on me until I couldn’t help but laugh.

That was one of the first pieces of storytelling advice I ever received: You’ve got to keep track of things in a story, especially bowls of beans.

I’ve come across many more nuggets of storytelling knowhow (often by getting big things wrong, but don’t tell anyone), and I thought I’d share three that I gathered in 2020. You might find them helpful too.

This one comes courtesy of William Strunk Jr. and E.B. White in their book The Elements of Style. It means simply: Say what something is, not what it is not.

Don’t say: She did not remember her keys. Say: She forgot her keys.

Strunk and White explain that these examples “show the weakness inherent in the word not. Consciously or unconsciously, the reader is dissatisfied with being told only what is not; the reader wishes to be told what is. Hence, as a rule, it is better to express even a negative in positive form.”

2. Use specific language, not abstract language.

This also comes from William Strunk Jr. and E.B. White’s The Elements of Style. They give these examples:

Abstract: “A period of unfavorable weather set in.” Specific: “It rained every day for a week.”

Abstract: “He showed satisfaction as he took possession of his well-earned reward.” Specific: “He grinned as he pocketed the coin.”

They point out that the second example in each pair does a far better job of inspiring a picture in the reader’s imagination because they’re concrete and specific.

3. Order the phrases within a sentence chronologically or from cause to effect.

This awesome nugget comes from K.M. Weiland’s Structuring Your Novel. To grasp it, take a look at the example she provides of a poor sentence, then its corrected counterpart:

“I whooped and did a dance right there on the front lawn after Kelsey agreed to marry me.”

“Kelsey agreed to marry me, and I whooped and did a dance right there on the front lawn.”

Halfway through the first example, the reader is perplexed. Why is this person whooping and dancing? While the reader’s confusion only lasts a few words more, that sentence represents the opposite of the storytelling goal: to immerse your reader. We all experience life in chronological order, from cause to effect. If we want our stories to be realistic, shouldn’t they do the same?

That’s about it. I’ve just got one thing to ask. If this blog reminded you of any other nuggets of storytelling advice, please share them in the comments section. It would be awesome to hear them. And by the way, you can leave any of the personal info fields blank when submitting your comment. There’s no need to tell me your name, or your email, or anything if you’d rather keep those private. I tried editing my comments section to make this obvious, but Google told me that I can’t edit my type of comments section. 🙁

But that’s enough from me! Have a great week.