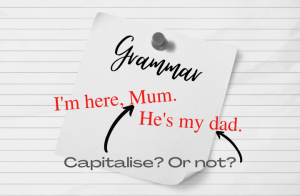 I’m sure we all know this rule better than the backs of our hands: Capitalise the first letter in a person’s name. However, there’s a lesser-known companion to this rule that we need to keep in mind: When a person’s title is used as if it were their name, its first letter should be capitalised.

By ‘title’ I mean family titles (Dad, Grandma), professional titles (Professor, Doctor), military titles (Colonel, Private), and many others—any word that can be used like a name.

So, what do I mean by ‘When a person’s title is used as if it were their name’? In the following sentence, ‘Professor’ is used like a name, and we can prove this by swapping ‘Professor’ for a name:

However, in the next example, ‘professor’ can’t be swapped for a name:

‘the Yvonne’? No, no! Names don’t follow a, an, or the. Therefore, a title that follows those words can’t be functioning like a name and shouldn’t receive a capital letter.

This ship needs a captain. — Look, Captain, the weather is getting worse.

I need to visit the doctor. — Would you help me, Doctor?

Now, what about this next sentence:

He walked with Grandpa to the shop.

We can swap a name into the sentence:

He walked with Henry to the shop.

Therefore, we know the title was functioning like a name, and it rightly receives a capital letter. However, that’s not the case with the next example:

He walked with his grandpa to the shop.

Let’s try swapping in a name:

He walked with his Henry to the shop.

Here’s a couple of final examples:

He drove his grandma to the gathering. — Tom, please give Grandma a hand.

When a person’s title is used as if it were their name, its first letter should be capitalised.

With that, Friend, I’m going to bid you farewell.