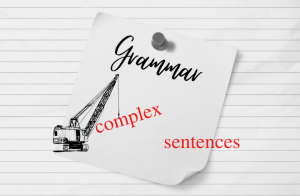 Recently, I was browsing punctuation and grammar books on Amazon when I came across an interesting review. Here’s an extract:

“I thought I’d got the hang of the different sentence types (simple, compound, complex) until I reached the section in this book where Seely [the author] uses the following as examples of complex sentences: ‘What you did yesterday was inexcusable’, ‘That is what I admire about Billie’. These are simple sentences, surely? Am I going mad?!”

Those are, in fact, complex sentences. The author of the book was right. But the reviewer isn’t going mad either. Sometimes, complex sentences prove that they deserve their name in every sense, and this is one of the most confusing of those times.

I replied to the review, trying to help out. And in this blog I thought I’d share that reply with you. Admittedly, I can’t think of many practical reasons for studying complex sentences, but if you’re anything like me, you don’t mind geeking out over something purely academic from time to time.

I’ll start at the very beginning with an explanation of complex sentences. You can, of course, look at the big headings and skip anything you already know.

Let’s lay a little groundwork so we can proceed as smoothly as possible. Here’s the first thing to remember: There are three types of sentences: simple, complex, and compound. We can forget about compound sentences for now, but before we tackle complex sentences, we need to understand simple sentences. And to do that, there are four terms we need to get under our belts: noun, pronoun, verb, and clause. Let’s get some definitions!

You probably know these already, but just so we’re all on the same page, here they are again:

A noun is a word that names a person, place, thing, or idea—Delia, field, television, heroism, etc.

A pronoun is a word that can take the place of a noun—I, she, it, that, etc.

A verb is a word that names an action—run, speak, hit, etc.—or a state of being—is, were, become, etc.

We could get all technical here and make lists of rare exceptions and outliers. But let’s face it, if the standard definition works 99 percent of the time, that’s the definition we want. So, a clause is a group of words that includes one verb and at least one noun (or pronoun). The following examples are clauses. I’ve underlined the noun (or pronoun) and italicised the verb.

Here’s another example of each type of clause:

Independent: We will drop the ball now.

Dependent: If you are ready

Now I need to ask you to keep these distinctions and definitions in mind because they are going to unlock the simple sentence and then the complex sentence.

Will you go home?

Add this definition of simple sentences to your mental file, and at last, we’ll turn onto the home straight—complex sentences and the Amazon reviewer’s problem.

At last, Complex Sentences Themselves

And let’s combine those clauses into a single sentence:

We will drop the ball now.

If you are ready

If you are ready, we will drop the ball now.

Graham, [who lives across the street], needs our help.

[After you visit her], will you go home [where you can rest again]?

As you can see with the second example, I was a little adventurous, combining one simple sentence with two dependent clauses.

The most common exceptions to my definition of a clause—a group of words that includes one verb and at least one noun (or pronoun)—are commands. The following example, which only contains a verb, is an independent clause:

With commands, we need to remember that there is an invisible noun, or assumed noun, standing before the verb:

And now, it’s time to tackle the confusion in that Amazon review

Here’s a reminder of the review:

“I thought I’d got the hang of the different sentence types (simple, compound, complex) until I reached the section in this book where Seely [the author] uses the following as examples of complex sentences: ‘What you did yesterday was inexcusable’, ‘That is what I admire about Billie’. These are simple sentences, surely? Am I going mad?!”

And here’s how I responded:

I can clearly see the confusion here. Those are, however, complex sentences. Let me try to explain.

However, this doesn’t seem to work with the examples you cited. In the first example, if we delete the dependent clause (‘what you did yesterday’), we’re left with this: ‘was inexcusable.’ If that’s supposed to be a simple sentence, it lacks a subject, right? Well, that’s because the dependent clause IS the subject of the sentence.

Normally, the subject of a sentence is a single word: ‘[That] was inexcusable.’ In this example, however, the subject is the entire dependent clause.

Normally, a nominative would be a single word: ‘That is [water].’ However, the nominative is instead the entire clause.

I don’t know if this blog will do you any practical good. It’s as though some elements of grammar were invented simply so that grammarians would have something to talk about. Nevertheless, I hope you enjoyed being a grammarian with me today. (I certainly did.) But I’d still like to issue a challenge: If you can think of a situation where knowing the definition of a complex sentence would help you outside of a classroom or exam room, I’d love to hear about it. Down in the comments section, persuade me that the hours I spent learning all the stuff in today’s blog weren’t wasted.

Have a great week and I wish you all the best as you write simple, complex, and compound sentences.