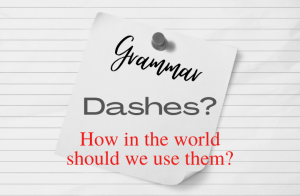 Grammarly.com compares dashes to Swiss army knives. They can stand in for commas, colons, and parentheses, as well as doing jobs of their own. There are, however, two things that unite everything dashes do: they interrupt, and they demand attention. When they’re used instead of parentheses, for example, The Writing Center, University of North Carolina at Chapel Hill, says: “Dashes add drama—parentheses whisper.”

We’ll get to dashes standing in for parentheses later on. First, let’s dive into dashes which stand in for commas.

Standing in for commas

Dashes can stand in for commas in two situations. One is purely stylistic. The other is a clarity lifesaver.

Let’s start with style! In the next example, a pair of commas demarcates a phrase within the sentence:

He was dressed up, from head to foot, in his warmest clothes.

If you want to emphasise the phrase between the commas, you can swap those commas for dashes. Remember, dashes interrupt and demand attention. They make the phrase stand out.

He was dressed up—from head to foot—in his warmest clothes.

I imagine the writer saying:

He was dressed up …

… then turning to me, looking me in the eyes, and saying:

… in his warmest clothes.

I have searched extensively—right around the whole property—without finding any new clues.

Now, what about dashes as clarity lifesavers? If a phrase within a sentence, like the ones above, needs commas within it, simply using more commas to demarcate that phrase could plunge all the commas into confusion—which ones are demarcating what now?! This can get really bad with what we call appositives. They’re a word or phrase, set between commas, that renames the previous word:

Have you met my grandma, Mrs Dorothy Woodford, previously?

But what if there were commas within the appositive?

Have you met my siblings, Drew, Penny, Wendy, and Jack, previously?

Comma mayhem! This ends up meaning: Have you met my siblings, and Drew, and Penny, and Wendy, and Jack, previously?

It should mean: Have you met my siblings, who are Drew, Penny, Wendy, and Jack, previously?

We get the right meaning with dashes:

Standing in for colons

In the first blog of this series, we discovered that colons follow complete sentences and introduce information that fulfils a promise just made. In the next example, we promise the reader four things, and after the colon, we list them out:

We will need four things on our trip: money, passports, clothes, and a phone.

A dash can replace that colon to achieve a less formal and more emphatic punctuation style:

We will need four things on our trip—money, passports, clothes, and a phone.

Incidentally, in my recent reading, I have noticed far more dashes than colons doing this job.

A dash can also do something a colon cannot: it can do it all backwards! Check this out:

Money, passports, clothes, and a phone—those are what we’ll need on the trip.

Now, lists of items aren’t all that colons deal with. They also introduce extra information that explains or justifies the sentence:

You guessed it, dashes can do this job too, making for a less formal and more emphatic tone:

And we find, yet again, that dashes can do it backwards, too:

There’s love and warmth aplenty there—that’s what I love about home.

And finally, dashes can overlook any formal requirements of colons. If we insist that colons only introduce information that explains, justifies, or fulfils the sentence, we can happily forget those requirements for dashes. It would be better to say that dashes can set apart any introductory or concluding phrases, making them stark and emphatic:

Pizza—give me one slice of that delicacy, and I’m in heaven.

The jury reached a verdict—not guilty.

The pursuit of happiness—is that not the right of every person?

Standing in for parentheses

Mr. Gregson was out on Tuesday mowing his lawn (something he’d only ever done on weekends).

Mr. Gregson was out on Tuesday mowing his lawn—something he’d only ever done on weekends.

Dashes have a brilliant ability for interrupting. Indeed, in everything they do, there’s a sense of interruption:

The Thames—as it runs swiftly from Thames Head to the North Sea—drains the whole of Greater London.

But there’s still some flow to that example, and commas could have done the job of the dashes. So, what about total interruption?

That’s where dashes reign supreme. In dialogue, dashes indicate that the speaker was interrupted or broke off suddenly, as in the following conversation:

In dialogue and in prose, dashes can show that the speaker or writer has interrupted themselves or taken a sudden switch of direction:

I know we’ve covered a lot. The dash is definitely a Swiss army knife. So, I want to bring up again a unifying phrase. Dashes interrupt a sentence and demand attention for a piece of information. But here are all it’s uses one last time:

1. Dashes stand in for commas in two situations:

First, when a pair of commas have demarcated a phrase within a sentence, dashes can make that phrase stand out:

I slipped out into the biting cold—my nose buried in my scarf—and then set off.

Over long weekends—Friday, Saturday, Sunday, and Monday—I like to relax.

2. A dash can stand in for any colon, creating a less formal and more emphatic tone:

I used several transport services to get here—buses, trains, planes, and taxis.

Birch, oak, and elm—they covered the hillside like a swaying green blanket.

I’ve decided what I must do—stand firm.

My computer—there’s a machine I don’t think I could manage without.

3. Dashes can stand in for any set of parentheses, turning a side note into an emphatic addition:

4. Finally, dashes can interrupt like no other punctuation mark can.

This might be the end—no, it really is the end—of this blog.

I hope this was as insightful for you as doing all the research was for me. Have a dashing week!

If you need a hand figuring out how to type a dash (since there’s only a hyphen key on a keyboard), or if you’d like to clear up the differences between hyphens, short dashes, and long dashes, fear not. I’ve got a blog post for just those questions. Click here to read on.

no spam ever—just one email a week