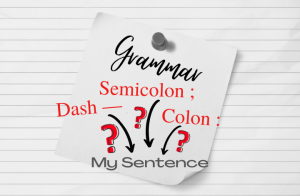 Over the past few weeks we’ve been dashing and colon-ing and semicolon-ing. But we’ve been doing them all separately. A direct comparison between those punctuation marks seemed to be missing. If I had a sentence where all three of them seemed to work, which one should I choose? That’s the question I’m going to answer.

So, let’s get one big thing straight. Dashes and colons are super similar. In fact, they do the same job, just in slightly different ways. Therefore, we’re first going to tell apart both colons and dashes from semicolons.

Colons and Dashes vs Semicolons

All three of these punctuation marks join two closely related statements. As we’ve already discovered in my blogs “Colons—How in the world do you use them?” and “Oh, Dash!”, colons and dashes show that those statements relate in either of two ways. Either the second statement justifies the first statement:

Or the second statement fulfils a promise in the first statement. In the following example, it’s the promise of “one thing”:

Our plan was designed to achieve one thing: the preservation of the town park.

We see that there is a flow from the first statement into the second, as the second statement justifies or fulfils the first. There is none of this flow in a sentence with a semicolon. Instead, a semicolon says, “Take these two statements together, on equal terms.”

There were seven types of fruit for sale; I bought five of each.

Okey-dokey! We’ve got colons and dashes vs semicolons figured out, and here are a pair of questions to summarise all of this:

1. Does the second statement justify or fulfil the first? If yes, use a dash or colon.

Mount Everest is a dangerous mountain to climb: over 280 people have died on the mountain.

I’ve got something big in store—a party that’ll blow your mind.

2. Do the two statements belong together, on equal terms? If yes, use a semicolon.

The cinema is almost empty on weekdays; it’s packed at the weekend, though.

I’d fallen in love with Paris; you were besotted with Tokyo.

So, what’s the difference between dashes and colons, then?

Well, it’s a matter of emphasis. As we discovered in last week’s blog, “Oh Dash!”, dashes have a knack for making things emphatic. This makes them a great tool for a writer who wants to give special importance to the second statement in a pair of statements:

I have one thing to ask—do you honestly love me?

On the other hand, the colon is more subtle. It simply keeps the sentence moving.

We had a plan this summer: to climb the tree in the back garden and spy on the neighbours.

Like we said last week, we must also realise, though, that the colon is more formal than the dash, and the style of our writing will influence which one we choose to use. It’s also worth noting that dashes are far more versatile than colons. While both colons and dashes join the types of statements we’ve investigated today, there are a myriad of other tasks that dashes can do, and you can read all about them here.

And thus we come to the end of this blog series. I’ve had a lot of fun. I hope you have, too. Happy writing!

no spam ever—just one email a week