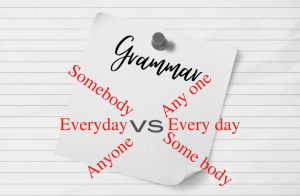 I used to stare at my computer screen, deeply perplexed, trying to choose between everyday and every day, and anymore and any more. They had me stumped. So, I set about Googling and dictionary reading until, finally, I let out a sigh as I got them straight in my head.

In this blog I aim to pass on that knowledge and the comfort I felt in knowing that one space between words wasn’t going to spoil my writing again. We’ll use everyday and every day as our prototypes to understand the system behind these words. Then, we’ll work through all the other words like everyday, and by the end of the blog you’ll be able to use somebody, anybody, nobody, everybody, someone, anyone, everyone, somewhere, anywhere, everywhere, anymore, sometime, something, and everything all with confidence and accuracy. And to top all that off, there’s a downloadable cheat-sheet at the end for you to keep handy for future use.

Everyday vs Every day

Here is the simplest way to put it:

If every describes day, write them as separate words.

I eat breakfast every day.

However, if every and day work together to describe another word, write them as one word.

His appearance is an everyday occurrence.

Every and day work together to describe occurrence. It was an ordinary, commonplace occurrence—an everyday occurrence. Therefore, I write everyday as one word.

This prototype explanation sheds some light on all the other words I listed above, and you could take this explanation and start using it right away. However, most of the words in that list vary slightly from this explanation. Therefore, I think the most helpful thing I can do is to work through them all. If you’d just like to scroll to the words you’re struggling with right now, read about them, grab the cheat-sheet at the bottom of the page, and leave the others for now, that’s totally fine. If, however, you’d just like to work through them all with me, that’s totally fine, too. I’ll enjoy your company.

Somebody, Anybody, Nobody, and Everybody

Just like I said concerning every day: if some, any, no, or every describes body, write them as two words. However, realise that when I say body, I mean an actual body, not a person—the  actual, physical body. I suppose an undertaker might comment, “Every body is now prepared.” Or a bodybuilder might be pleased if someone said, “That’s some body you’ve got there.”  Or a crime novelist might write, “There was no body to be found at the crime scene.”

On the other hand, these words should be written as one word whenever they are used to refer to a person or people (not a physical body). You’ll remember that in everyday, every and day worked together to describe another word. In everybody for example, every and body work together to refer to people. “Everybody came to the party.” “There was nobody home.” “He’s not just anybody.” “We need somebody to help us.”

Someone, Anyone, and Everyone

Just like the previous set of words, these words refer to a person or people whenever they’re written as one word. “Someone better come quickly.” “Anyone can visit.” “I don’t know what everyone will do.”

Sometimes, however, the word one is used to refer to something other than a person. In these situations, every and any are used as separate descriptive words. An astronomer might talk about planets and say, “Every one of them orbits a star.” Or a waiter might hand someone a menu and say, “Look at the meals and choose any one from the list.”

The everyday prototype doesn’t help us very much with these words because, while you can use every to describe a day, you can’t use every to describe a where as if a where was a thing. No one could say, “Do you have more than one where? I’d like every where that you have.” Therefore, it seems that the words in this group should always be written as single words. But there is one situation where that isn’t true.

Sometimes, where  is used to introduce a phrase that describes the location of some or any. These examples will explain:

We need water. Could we have bought some where we stopped yesterday?

Why don’t you have spoons? Don’t you keep any where the rest of your cutlery is?

However, unless you’re dealing with a situation like the ones immediately above, somewhere, anywhere, and everywhere are always written as one word.

Unlike the last group of words, these ones follow the everyday prototype perfectly. If your sentence is about more of something and any describes how much more, write any more as two words:

I can’t eat any more cake.

And if your sentence is about a quantity of time, and some describes how much time, write some time as two words:

It’ll be some time yet before I’m finished.

On the other hand, anymore and sometime are used as single words when they describe a place in time. Anymore describes all future points in time, and sometime describes a single non-specific point in time. Here are a couple of examples:

I’m not sure I can run anymore.

Some thing is written as separate words only when you are describing a thing as being impressive. Consider this example:

That’s some thing you’ve got there!

At all other times, something is written as one word (at least all other times that I have managed to think of, and believe me, I’ve tried hard). However, also note that there is no such word as somethings. If you want to write about more than one thing, you will need to use two words: some things.

Everything is always written as one word. (Again, I’ve tried really hard to come up with a situation where it could be two words, but I’ve come up with nothing.)

Please feel free to share your thoughts with me down in the comments section. If you can think of a situation where every thing would be correct while everything would be wrong, I’d love to hear about it and anything else you have to share.

Finally, here is that cheat-sheet I promised. It’s a handy guide you can refer to at any time to make your everyday vs every day decisions that bit smoother.

Until next Friday, have a great week!