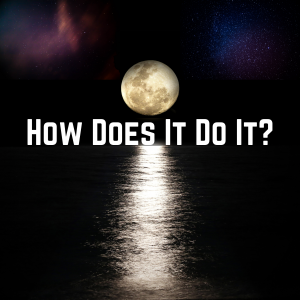 “And even you might be surprised just how tasty they are.” Father closes the storybook and kisses his son, Harry, on the forehead. He lingers on the edge of the bed until his son’s eyelids fall shut. Silence is the loudest sound, the moon is the brightest light, and the rhythmic rise and fall of his son’s chest are the sharpest movements.

The ceiling crumbles. The bed falls through the floor. Father and son tumble downward. The bed disappears. Everything disappears.

Father and son stand, side by side, hand in hand.

“Are you hurt?” Father’s voice colours with concern.

Harry’s six-year-old hand trembles in his father’s. “No.”

Father takes one step forward and reaches out. “I can feel a wall up ahead, and I can feel another wall to my right.”

Harry follows his father, hand in hand, as his father feels his way along the wall. “Dad?”

“No, Dad.” Harry’s voice is softer than a whisper.

Father taps a fourth wall with his knuckle.

“Don’t you make any sudden movements.”

An ear-piercing yelp erupts in the dark. Father takes his son in his arms.

Engines growl. Thousands of spectators roar. Father and son race across the starting line. Father grabs the steering wheel. Harry clings to his seat belt. Stock cars topping two hundred miles-per-hour vie for every inch of racing track. Father presses the accelerator to the floor and thunders forward with the pack. He tightens his grip on the wheel and watches the oncoming corner. He counts himself down. Three, two, one. He makes the turn. The car skids. Harry screams. Airbags deploy. Darkness descends.

The scent of pine needles infuses the forest air as a gentle breeze brushes past the trunks and the branches, enticing them to sway like ballroom dancers. Sunlight, though pouring forth on high, drips and dribbles through the dancers until it displays its presence in a dappled pattern on the dance floor. Squirrels quickstep from patch of sunlight to patch of sunlight collecting for their winter stores. Birds in vibrant costumes waltz between their nests and the creeping and the crawling ever ongoing beneath the topmost layer of fallen needles. Father and son soar high in the branches of the forest, borne aloft in a treehouse while they cast their eyes upon the wonder of nature.

Harry draws the forest air deep into his lungs, turns to his father, and buries his head in his father’s waist. He clings to his beacon of comfort. “I don’t want to, Dad.”

Father closes his eyes and extends his arms around his son’s body. He holds him tight as the calmness of the forest washes over both father and son and draws Harry’s mind, one step at a time, away from the trauma of the crash. Five minutes, each one felt as an hour, pass by. Finally, Harry pulls himself away from his father’s embrace and looks out over the forest again.

“I see it. Lovely little creatures, aren’t they?”

A shrill whistle claims Father’s attention, and he traces the sound to a steam train approaching a station. “At the station, we could find out where we are.”

Harry points to a ladder leading down to the ground.

Father and son step from the platform onto the train. Father leads toward a pair of vacant seats and ushers his son into the one nearest the window. Father sits next to his son, and they wait for the train to pull away from the station. Within a minute or two, the pine trees begin to glide from one side of the window to the other as the train chugs away. Harry gazes into the distance muttering, “I don’t like them. I don’t like them.” Father places a hand on Harry’s shoulder and gazes out the window listening to the click and clack of wheel and rail.

Lightning flashes. Thunder rolls. Rain pours. Father and son stand in a field that stretches to the horizon on every side. Rain hammers against the ground. The ground overflows with water. Father lifts Harry onto his shoulders. The rain plummets harder every minute. Water pours into Father’s shoes. Father shields his eyes with his hand. Water washes over his knees.

“Yes.” Father wades toward the sound.

Another bleat. “There it is again, and I can see it.”

Father pushes through the water. He reaches the boat when the water reaches his waist. He lifts Harry from his shoulders into the boat.

The goat bleats again. “We’ve got to save it, Dad.”

Rain falls yet heavier. Wind howls. Waves roll. The boat floats. Waves grow taller. Waves grow stronger. Wind howls louder. The boat lurches from side to side. Waves crash into the boat. Water rises within the hull. Father and son hide their faces from the gale. Greater, taller, fiercer waves crash over the sides. Water fills the hull.

The sun mounts the horizon. Sleep slips away. Harry opens his eyes and jumps out of bed. He grabs his dressing gown and flies down the staircase. He bursts into the kitchen where his father stands with a cup of coffee.

Harry asks between pants, “Dad, do you remember the story you read me last night?”

“And what you said about vegetables?”

Father listens to the pants, watches the heaving chest, and furrows his brow. “For breakfast?”

Wonder breaks across Father’s face. He opens the fridge. “A lovely piece of carrot.” He takes one and peels its outer skin. “You’ll love it.”

Harry breathes in and out with great deliberation.

Harry takes the carrot and lifts it to his mouth. He closes his eyes and takes a firm bite. Father watches closely. Harry’s face relaxes, and he takes a second bite.

“I like it,” Harry squeezes the sounds out of his packed mouth and smiles with bulging cheeks. “It’s actually quite nice.”

Father shakes his head in astonishment. “How does Green Eggs and Ham do it?”

This story is part of Glimpses.

If you enjoyed this story and you’d like to read the full Glimpses collection, just click the cover, and get your FREE copy.