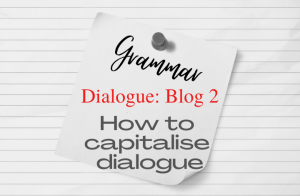 If you’ve written fabulous dialogue, I’m ready to help you defend it against awkward punctuation, strange capital letters, and wonky paragraphing. Mere formatting errors will never get between your dialogue and your readers again.

Last week, we worked through how to paragraph dialogue, and you can click here to read that blog. This week we’ll work through the principles of capitalisation for dialogue and dialogue tags.

The first and most important principle is this: Always capitalise the first word of dialogue.

He glanced down the table. “Pass the salt, please,” he said.

Even capitalise a single word of dialogue.

Even if the dialogue comes at the end of a sentence of prose as if it were simply the continuation of that sentence, capitalise the first word.

After walking home from the shop, he dropped into his seat and said, “Wow, that was a long walk.”

Even if the dialogue is a fragment of a sentence—say, only two words—still capitalise the first word.

She called over her shoulder, “Found it.”

Before we head on, let’s take a quick moment here to define dialogue tags.

They are phrases that indicate who is speaking. The most common dialogue tags are he said and she said. There are then many variations of these, like: Sandy screamed, I replied, or we retorted, to name a few. All of these phrases are dialogue tags, and I’ll refer to them in the next section and later in the blog, too.

There is one situation where the first word of dialogue appears to reject the capitalisation principle:

“When you hide,” she whispered, “remember to be silent.”

“When you hide, remember to be silent,” she whispered. “They mustn’t hear you.”

Now we need to figure out how to capitalise dialogue tags.

Both the first and second categories of dialogue tags can function in the same way and can be used in the same place in a sentence.

While this may seem like a principle that should be followed merely because it is a principle, there is an important and practical situation where following this principle (or not following it) could change the meaning of your sentence entirely.

He dashed across the finish line. “I won!” he cried.

He looked at the picture. “I miss her,” he cried.

If this dialogue tag belonged to the second category, however, it would be an associated but separate action. He cried would not indicate the way he spoke, but rather that he performed the action of crying at the same time as speaking or immediately after—crying tears of joy in the first example or tears of sorrow in the second:

He dashed across the finish line. “I won!” He cried.

He looked at the picture. “I miss her.” He cried.

There are two final points I must make to conclude this blog with clarity.

“In the winter,” he smiled, “you can ski for miles around here.”

“When will you get here?” she asked.

Well, that’s it from me. We’ve covered this week’s topic.

1. Always capitalise the first word of dialogue, no matter what.

2. Don’t capitalise the first word of a dialogue tag that indicates a way of speaking.

3. Capitalise the first word of a dialogue tag that indicates an associated action.

Now I hope you feel equipped to tackle capitalisation in dialogue and dialogue tags. If, however, you have any questions, please do not hesitate to leave a comment. All the best! I’ll see you next week with the final blog in this dialogue series—punctuation in dialogue.