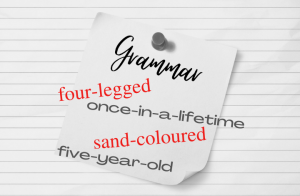 Words joined by hyphens. They’re all around us. But what are they?

Give me five minutes, and I’ll explain just that. By the end, you’ll also know exactly when to put those hyphens into use in your own writing.

Often, more than one word is used to describe a noun (a person, place, thing, or idea). Here are two examples, one without a hyphen and one with a hyphen:

In the example without the hyphen, each descriptor could provide a meaningful description of the ‘table’ on its own. The ‘table’ is indeed ‘tall’, and it is ‘white’. The same cannot be said of the example with hyphens, however. There’s no such thing as a ‘four table’ or a ‘legged table’. Only when ‘four’ and ‘legged’ are used together do they achieve a description of any meaning. Therefore, they must be joined together, and the hyphen does that job.

The first two descriptors would make no sense on their own:

And the final descriptor would mean the opposite of our intended meaning:

And here’s one last example that I had to include. It’s a description a friend of mine wrote that I absolutely loved:

Again, none of the descriptors could achieve meaningful descriptions on their own. Therefore, those hyphens do an essential job of joining them together into a single description that is meaningful.

1. Only one descriptor needs to fail

Take a look at this example:

‘Sea’ could achieve a meaningful description of the ‘expedition’ on its own:

However, the same cannot be said of ‘deep’:

One descriptor failed to make a meaningful description, and that is enough to require a hyphen.

2. Don’t hyphenate pairs of descriptors when the first descriptor describes the second

Take a look at this example:

Here’s another example of this:

3. One complication for point 2

There are a handful of situations when a hyphen is required between words like those above. This is the most common of these:

In this example, ‘well’ describes ‘known’. However, unlike ‘very’ or ‘beautifully’ in the previous examples, there is a theoretical possibility that ‘well’ could describe that the ‘actor’ is not sick. It’s useful to remember here that the hyphen is used when one or more of the descriptors does not provide a meaningful description. The actor’s health certainly isn’t meaningful to this sentence, and by using the hyphen, we can prevent that confusion from ever happening.

In other situations where a word is supposed to describe the second descriptor but could theoretically describe the noun, use a hyphen just like I did here.

The following phrase needs a hyphen:

The following phrase is similar, but it doesn’t need a hyphen because ‘widely’ couldn’t describe the noun, even theoretically:

4. Don’t use hyphens when capital letters, quotes, or italics already group the descriptors together

Here’s an example with capital letters:

In this example, a hyphen would be justified. However, capital letters already serve to group those descriptors of ‘party’.

In this next example, quotes do the same job:

a ‘flash in the pan’ contestant

In this next example, italics do the job. Italics are most commonly used with foreign terms, as they are here:

5. Don’t use hyphens when the descriptors follow the noun

In all the examples so far, the descriptors have preceded the noun that they describe. Hyphens are not required in these examples, though:

That building is sand coloured.

That actor is well known.

That boy was five years old.

Let me pull this all together by saying this: Hyphenated descriptors are like good sports teams; they are worth more than the sum of their parts. In this sentence, one descriptor merely adds to the other:

I drank a cold, refreshing juice.

In the next sentence, the descriptors mean something together that they could never mean individually:

I drank a thirst-quenching juice.

I only wish that sentence was true!