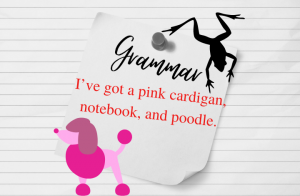 Have you ever bitten off more sentence than you could chew? I mean, have you ever tried to put a long and complex idea down on paper only to reach the end of a very long sentence, look back at what you wrote, and think one thought: ‘Don’t tell me I have to edit that!’

This happens to me sometimes. Take a look at this 50-word sentence from a story of mine:

‘She was dressed as a picture of modern magnificence herself, but as she saw the gold and the silver glisten and heard the thunder roll above, she felt that they, the painted lords and ladies, with all their grandeur and pride, were far more suited to this setting than she.’

Reads smoothly enough now, right? You should have seen the first draft! (Or maybe it’s good you didn’t.)

This is exactly the sort of thing that happened to my mum recently, and she roped me in to help. (I guess that’s a perk of having a grammar-blogging son.) The problems she faced were ones that assail many complicated sentences, and she suggested that I use her sentence as the basis of a blog post.

In her sentence, she wanted to present a choice between a group of three things and another single thing. Like this: Do you want ice cream, sprinkles, and toffee sauce, or do you want chocolate cake? However, her sentence was a little (actually, a lot) harder to wrangle into shape than that one.

I’ve devised a fictitious sentence that’s structurally identical to my mum’s for us to use in this blog, and here it is:

How do we understand that it’s time for another economic boom, great resurgence and an enormous drop in unemployment, and also nearly time for a crash, both at once?

There’s a surprising number of grammar faux pas in that sentence. We’ll split them into two areas that need spruced up. First, we need to fix the series of three (another economic boom, great resurgence and an enormous drop in unemployment). Second, we need to iron out the relationship of those three items to the final item (and also nearly time for a crash, both at once).

Series of items have a really great feature: The words before the first item in the series apply to all the items in the series. No doubt, you’re taking advantage of this rule all the time. Otherwise, your sentences would look something like this:

I’ve got a pink cardigan, notebook, and poodle.

How do we understand that it’s time for another economic boom, for great resurgence and for an enormous drop in unemployment …

Here’s another example. In the following sentence, ‘nine’ isn’t supposed to apply to every item in the series:

He needed to wait for nine friends, footballs, and practice cones before he could start the five-a-side match.

Unless he truly did need nine footballs and nine practice cones, we need to employ our leapfrogging technique:

He needed to wait for nine friends, for footballs, and for practice cones

Leapfrogging is a great solution to have up your sleeve.

It can make so many potentially problematic sentences crystal clear with very little effort. And with that said, I’ll bid you farewell until next week when I’ll tackle the second half of that sentence inspired by my mum.