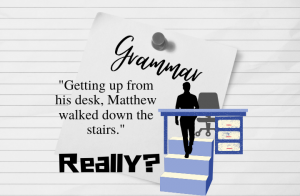 Who doesn’t love an adrenaline-pumping chase sequence? From Mission Impossible and Jason Bourne, to Star Wars and Indiana Jones, there’s no shortage of grand pursuits to revel in. During last month’s NaNoWriMo, I particularly enjoyed writing a couple of chase sequences for my novel. I’d get caught up in the rapid drama ensuing in my imagination, darting across the page with my characters, and …

Here’s an example of what I mean:

Rounding the corner, he sped down the next passageway.

In the heat of the moment, I’d forgotten that introductory phrases that start with an ‘-ing’ word—like ‘rounding the corner’—always express an action that occurs at the same time as the rest of the sentence. I’d accidentally said that my character was rounding the corner at precisely the same moment as he was speeding down the next passageway. That’s not even possible! It’s like the lady in the next sentence putting her shoes on while going to work.

Putting on her shoes, she headed out to catch the train.

I’m trying to imagine her now, hopping down the street, one shoe on, one shoe stubbornly refusing to slip over her heel.

Now, there are, of course, loads of legitimate times to use these introductory phrases that start with an ‘-ing’ word.

Standing on the doorstep, he rang the bell.

Pushing the covers back, she climbed out of bed.

Running to catch the bus, he felt his heart pounding furiously.

After rounding the corner, he sped down the next passageway.

After putting on her shoes, she headed out to catch the train.

Another simple solution is reworking the sentence around ‘and’.

He rounded the corner and sped down the passageway.

She put on her shoes and headed out to catch the train.

But there are a myriad of ways those sentences could have been reworked. For me, the real task is noticing the problem, even when I’m absorbed in my most dramatic scenes.

Introductory phrases that start with an ‘-ing’ word always express an action that occurs at the same time as the rest of the sentence.

And the following is definitely not: Getting up from his desk, Matthew walked down the stairs.

And that’s it from me. Have a great week!