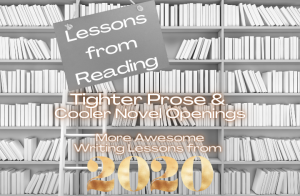 It’s October 2019. I’m applying to university. I’m filled with anticipation, excitement, and no shortage of nerves.

A few weeks later, I receive a response—I’ve been offered a place at university. A bunch of nerves subside, and even more anticipation and excitement fills their place.

It’s all decided—I’ll take up the offer. I’ll leave home. I’ll move continents. And I’ll study the subject closest to my heart. English.

But then Covid-19 arrived, and with it, lockdown … and disappointment.

There would be no moving continents for me. No university. No English. And, instead, a year stuck at home.

But! In my case, that actually worked out pretty well … ok, super well.

With a million thanks to Mr Internet—with his online courses, e-book stores, and podcasts—I’ve learned more about writing over the last year than any year before. From Save the Cat! Writes a Novel by Jessica Brody to Creating Character Arcs by K.M. Weiland, from Brandon Sanderson’s lecture series Writing Science Fiction & Fantasy to the Jerry Jenkins Writers Guild, I’ve been fortunate enough to find a wealth of information to spend my time studying. I reckon we could call it pre-University.

A few weeks ago, I shared three highlights of my pre-University in my post ‘3 Awesome Writing Lessons I Learned in 2020’, and it seemed a shame not to share more, hoping that you’ll find them just as useful as I have. And if you’ve been wondering what writing resources to seek out for yourself, hopefully you’ll find some ideas here.

The Jerry Jenkins Writers Guild has been, bit by bit, stripping the flab from my prose. I’m not all the way there yet, but when I revisit the stories I’ve written over the last year, I can see that they’re getting better.

1. Avoid subtle redundancies—like ‘he blinked his eyes’ or ‘he stood on his feet’. What else would he blink or stand on? So, delete ‘his eyes’ and ‘on his feet’.

2. Omit needless words—like ‘he was surprised by the fact that I came’. If the sentence means exactly the same thing after I delete something, I should delete it. ‘He was surprised I came.’

These three rules alone have done my writing a massive service.

This last year, I’ve also started writing a second novel, and while my writing may be tidier, that doesn’t mean I’ve had an easy time deciding how to start my novel. Here are the two pieces of advice that finally got me on track.

When I read Save the Cat! Writes a Novel by Jessica Brody or Structuring Your Novel by K.M. Weiland, I quickly discovered that the central adventure of my story is supposed to start around a quarter of the way through my story. That’s when Frodo leaves the Shire in The Fellowship of the Ring, when Luke Skywalker leaves his home planet of Tatooine in Star Wars, or when Dorothy is tornado-ed away from Kansas in The Wizard of Oz.

So, I sat, planning my next novel, and thinking, ‘The adventure is supposed to start a quarter of the way through my novel … so, what on earth happens before that? Does everyone just sit around?’

2) I can introduce what my character values through what they pursue for their project (double yay!);

3) I can introduce a host of important facts about my character through how they pursue their project (triple yay!); and

4) I can fill the first quarter of my story with more than people sitting around (quadruple yay!).

The big difference between the project and the adventure that starts at the quarter mark is that the project occurs within the normal scope of the character’s life. In The Fellowship of the Ring, Frodo attends Bilbo’s birthday party. In Star Wars, Luke Skywalker helps his uncle buy droids while trying to persuade his uncle to let him attend flight school. In The Wizard of Oz, Dorothy tries to protect her dog, Toto, from her evil neighbour. Then, as we all know, each of these characters begins an adventure waaaaaaaay outside the normal scope of their lives once the quarter mark arrives.

Finally, the podcast Writing Excuses with Brandon Sanderson, Dan Wells, and Howard Taylor pointed out a project idea that I instantly grabbed for my novel.

So, I rewrote my novel opening with a project that’s the final showdown of a galactic rescue mission, and I’m finally happy. Then, at the quarter mark, I can send my pilot on a mission waaaaaaaay outside her comfort zone and worthy of the whole rest of the book. Perfect!

These little gems of advice have come at the perfect time for me. I hope you’ll find some of them useful, or if you’re needing answers to different problems, maybe some of the resources I’ve mentioned will be good places to start looking. If you have found something useful here, please let me know in the comments. That would make my day.

I’ve now reapplied to university, and I’m waiting for a response with bated breath. Let’s hope it works out better this year … except, as I said, I’m not sure last year could have worked out any better anyway.

I’ve applied these lessons to some of my short stories.

Read them for free by clicking the cover below.