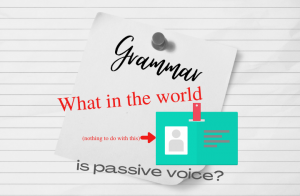 That must be one of the most common pieces of grammar advice. And one of the most valuable ever. So, how terrible would it be if you had to ask, ‘But what is passive voice’, and no one had a simple answer? That’s what I’m here to provide today. So…

What is passive voice in the simplest possible terms?

In addition to an action, our sentence also includes a “thing”—a bridge. To discover if your sentence has a passive voice or an active voice, consider one question. Does the first “thing” in the sentence do the “action”? Does the bridge do the building? No, of course not. It’s a bridge!

Patrick was welcomed home by his kids. (Did Patrick do the welcoming?)

The book was placed back on the shelf. (Did the book do the placing?)

The bag is always carried by Mark. (Did the bag do the carrying?)

Each of the following examples, however, has an active voice. The first “thing” does do the “action”.

The cat climbed the wall.

You are coming over for dinner.

One of the windows flew open.

Are you with me? Simply…

Ok, we should avoid passive voice. How exactly?

Put simply, make sure that whatever or whoever does the “action” is the first “thing” in the sentence. Check out the following examples:

Passive: The bag is always carried by Mark.

Passive: Patrick was welcomed home by his kids.

How much better are the active ones! They’re livelier, more direct, and more concise. And to transform those passive sentences to active ones, we only needed to rearrange a few words.

And this leads me to something I wish someone had told me sooner.

You see, I’d become an active voice convert and evangelist. I was determined to use it in every sentence I wrote. But there was one type of sentence where it really, really didn’t seem to work. The first passive voice example from above is one of these: The bridge was built in 1705. If we try to make sure that whatever or whoever does the “action” is the first “thing” in the sentence, we quickly realise that whoever built the bridge isn’t even in the sentence. We can’t just rearrange some words to make this sentence active. We’d need to add in whoever built the bridge:

John Smith and his team of forty stone masons built the bridge in 1705.

But now John Smith has stolen the spotlight. If someone said that sentence to you, you’d probably think John Smith was the important point—the thing you should remember. And yet the date was the only thing we set out to communicate: The bridge was built in 1705. Sometimes, it’s irrelevant who did the action. Sometimes, the walls are painted green, and we don’t care who painted them. Sometimes, we remember that Queen Elizabeth II was coronated when she was twenty-seven, and we don’t care who placed the crown on her head. I just wish someone had reassured me sooner that I wasn’t a grammar criminal for leaving some passive sentences in places where the person who acted was irrelevant.

Well, that’s about it from me.

And I’ve shared an extra point that I wish I’d been told sooner—the passive voice is useful when the person who acts is irrelevant.