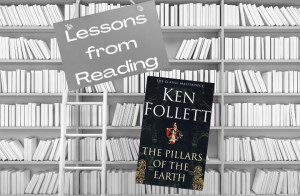 Writing description can be a tricky business. Too much and the reader might get bored. Too little and they’ll definitely get confused. I don’t envy the author who’s got to set the scene and keep a tight grip on the reader all at once. I might ride a unicycle while spinning a basketball instead.

However, I have good reason for courage.

In this post, I’m going to talk about a lesson I learned from Ken Follett’s The Pillars of the Earth. In Chapter 3, William Hamleigh, a nineteen-year-old knight, approaches Earlscastle, the fortress of the Earl of Shiring. His family want to capture it, and they’ve sent him as a scout.

As William rides toward the gate, a description of the fortress seems to be in order. Ken Follett now has to show his skill. Here’s what he writes:

“William noted that the last section of the bridge could be drawn up into the massive stone gatehouse that formed the entrance to the castle. There were stone towers at intervals all around the wall, so that every part of the perimeter could be covered by defending archers. To take this castle by frontal assault would be a long and bloody business, and the Hamleighs could not muster enough men to be sure of success, William thought gloomily.”

A little later in Chapter 3, another character, Tom Builder, approaches the same Earlscastle. He’s looking for employment as a mason. Here’s the description we’re given:

“The wooden bridge that led over the moat to the gatehouse was flimsy and ramshackle, but that was probably how the earl liked it: a bridge was a means of access for attackers, and the more readily it fell down, the safer the castle was. The perimeter walls were of earth with stone towers at intervals. Ahead of them as they crossed the bridge was a stone gatehouse, like two towers with a connecting walkway. Plenty of stonework here, Tom thought; not one of these castles that are all mud and wood. Tomorrow I could be working. He remembered the feel of good tools in his hands, the scrape of the chisel across a block of stone as he squared its sides and smoothed its face, the dry feel of the dust in his nostrils. Tomorrow night my belly may be full—with food I’ve earned, not begged.

“Coming closer, he noticed with his mason’s eye that the battlements on top of the gatehouse were in bad condition. Some of the big stones had fallen, leaving the parapet quite level in parts. There were also loose stones in the arch of the gateway.”

After I read the first description of Earlscastle, I was simply pleased that the description in The Pillars of the Earth never seemed to drag. However, I didn’t consider why that was until I read the second description. Then something became clear to me. The description never dragged because of three things: It was couched in opinion, important to the reader, and doing two jobs at once. Let me explain.

That’s not all those paragraphs do to make their description irresistible, though. When William Hamleigh approaches, each feature of the castle is presented alongside William’s opinion on how vulnerable it would be to an attack. Previously, in Pillars we read about why the Hamleighs want to take the castle. We understand the stakes. We want to discover the fortress’s weaknesses. We’re invested in every discovery about Earlscastle. Really, we are as much scouts as William. The description isn’t really description at all; it is a battle plan, and no one ever skips those.

Yet again, none of this occurred to me at first. Tom had to arrive for me to catch on. Then, I saw that each feature of the castle is described alongside Tom’s opinion on whether he can repair it. Remember, he’s a mason in need of a job—desperately in need. He’s got a family, and they’re near starving. His heart aches for them like his stomach aches for food. And we’re invested. We care deeply. Almost as much as Tom does. Therefore, we’re looking for anything Tom can fix as keenly as Tom is looking. The description is no longer mere description.

Finally, in these paragraphs, I think we see the extra mile in description—the author’s dream. Did you notice that nineteen-year-old William thinks the castle is impregnable? Wasn’t he impressed with its strength? How about Tom? Didn’t his experienced mason’s eye notice poor stonework, a crumbling bridge, and vulnerable parapets? Ken Follett achieves a description of William and Tom’s differing levels of perception and experience without having to address them separately. He builds character without doing any extra character work. I can’t help but applaud that.

Honestly, I can’t help but want to implement these techniques in my writing. I want my description to sing.

If I can crack that first point, I’m going to try to make my reader want the description as much as my character. I’ll convert a sports car into the anxiously expected birthday present that please, please, please has the latest speaker system. I’ll convert a restaurant into the potential date destination that needs to be just right, because if it isn’t, a perfect relationship could stumble.

And if I’ve made it past level two, I’ll aim to nail character work with description. The trees, breeze, and stream, in all their beauty, could reveal my character’s source of joy. The rumbling of a commuter train with its tightly packed travellers, frequent announcements, and forceful stops could reveal a self-conscious, easily annoyed character, who isn’t too steady on their feet. A cold and crisp, snowy morning could make all the hairs on my character’s legs stand up, and as some snow falls from a branch onto their face, they realise just how much they hate the cold.

By the way, I love snow. That character is not me!

But back to our topic. Those two pieces of description from The Pillars of the Earth have been like little revelations to me. Yes, description is tricky, but maybe it’s a little less tricky now. I certainly hope so. I know I’m going to try all these techniques, and I hope you will, too.