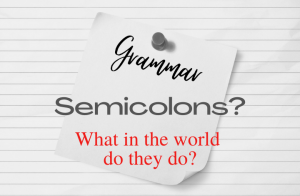 Welcome to week two of our foray into punctuation marks I wish were easier to use correctly. Last week, we figured colons out, and you can read that blog here. This week we’ve got semicolons to deal with. They’ve got three uses—one that’s somewhat tricky to navigate, and two that are far more straightforward. Let’s throw ourselves in at the deep end and then ease off after that.

A semicolon can be used anywhere a full-stop (period) is used—between any two complete sentences—but compared to a full-stop, a semicolon shows that those two sentences belong together. They’re two sides of one thought, like two sides of the same coin. An insightful article from themillion.com puts it this way: “Semicolons are useful when two thoughts are related, independent yet interdependent, and more or less equally weighted. They could exist as discrete sentences, and yet something would be lost if they were, an important cognitive rhythm.”

Here are a couple of examples that I feel illustrate this well:

I couldn’t decide where to eat. The cafe on the corner did the most exquisite sandwiches; the one over the river did the tastiest soups. If only they were combined as one shop!

While I couldn’t remember the lecture, I could still answer the question on rainfall. The Amazon is a rainforest; Epping Forest is just a forest. Therefore, I reckoned the answer had to be the Amazon.

I could have used full-stops instead of semicolons, but those semicolons preserved a connection between ideas that sat inseparably in my mind. Yes, those sentences seemed the perfect places to put semicolons.

But there’s a huge catch—HUGE. Here’s a rather famous quote from Kurt Vonnegut about semicolons:

“All they do is show you’ve been to college.”

Here’s another one from John Irving:

“No one knows what they are anymore…. If you’re not in the habit of reading nineteenth-century novels, you think that the author has killed a fruit fly directly above a comma—semicolons have become nothing but a distraction.”

How about one from Richard Hugo:

“Semicolons indicate relationships that only idiots need defined by punctuation. Besides, they are ugly.”

What did semicolons ever do to them? Poor little semicolons…

But those authors make serious points. They certainly don’t represent all authors. There are still plenty of semicolons out there in book-land, and I enjoy reading them. But I stand thoroughly cautioned against smattering semicolons across everything I write.

Those authors who would never use semicolons would instead make the statements separate sentences, possibly including extra words if the relation between the statements needed that emphasis.

At least you now know where to use semicolons if you do want to use them. I now leave this matter to your judgement and your writing style, and to the advice of one of my favourite authors, Brandon Sanderson. The purpose of punctuation is to guide and pace a reader through your thoughts without confusing them.

This one is refreshingly simple.

There are three juices: apple, orange, and mango.

But sometimes there are commas within items on the list, such as in a place name: Chicago, Illinois. When this is the case, semicolons take on the commas’ regular jobs—separating the items on the list:

The teams were Wendy, Bob, and Ashley; Tim and Matt; and Brian, Tracy, and Sam.

This one is super similar to the last one. It’s just less clear cut. In a list, you automatically switch to a semicolon when there’s a comma within an item on the list. In a sentence, it’s more a matter of judgement.

You know compound sentences? The ones where two independent halves are joined by a comma and a word like “and”?

I walked to the shop alone, and I walked home with friends.

That comma can be swapped for a semicolon if the sentence becomes so crowded with other commas that the reader might fail to notice the comma with the biggest task—separating the halves of the sentence.

I walked on my own to the shop, where I bought apples, cabbages, and bread; and Francis, Jill, and Henry walked home with me.

If that comma hadn’t been swapped for a semicolon, it would have been like a pine tree in a pine forest—lost. And it falls to the writer to decide when they’ve got a comma forest on their hands.

First, they show the connected nature of two complete statements.

They finished first; we finished last.

But remember, many authors don’t like using any semicolons.

Second, they separate the items in a list when there are commas within the items.

He purchased everything on the list: juicy, red apples; Seville oranges; and seedless grapes, red and white.

Third, they replace commas that separate the halves of a compound sentence when the sentence is crowded with other commas.

I collected pebbles, twigs, and leaves; but thanks to the delay getting home, I haven’t added them to the scrapbook yet.

Happy semicolon-ing until next week when we talk about dashes.