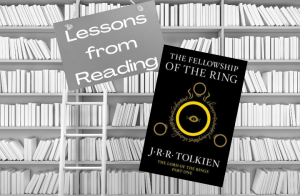 In December 2012, a young Matthew took his seat in the cinema without a clue what he was getting himself into.

The screen lit up as The Hobbit: An Unexpected Journey began. Bilbo Baggins’ welcoming voice uttered that glorious line: “In a hole in the ground there lived a hobbit.” And I was swept off into Middle Earth for the first time.

Over the months that followed, I devoured The Lord of the Rings, both the books and the films. And over my teenage years, I explored more and more of Middle Earth as that fantastical and beautiful land with its heroic and tragic stories became one of my greatest joys.

Now, as I study the craft of writing, I can think of nothing better than looking to those precious tales and letting them teach me. So, when it came time to learn about story structure, I was excited to discover that The Fellowship of the Ring is a crystal clear example of the 4-Act structure that bestselling author Joe Nassise teaches—a story structure he developed by studying books and films to find their common elements, and which has now helped him write more than forty books himself.

The basic outline of 4-Act structure:

How this plays out in The Fellowship of the Ring:

Spoiler Alert! If you haven’t seen the film or read the book, this post will spoil all parts of the story, including the end.

We meet the hero—Frodo Baggins—as he climbs onto Gandalf’s cart and rides into Hobbiton. Thus, as they ride side by side, we’re introduced to the setting—the beautiful Shire. Very soon, the story’s central problem appears: Bilbo has a magic ring. We begin to see the story’s stakes as well: Bilbo hasn’t aged in sixty years, but he feels stretched; he is also dangerously and unnaturally attached to his ring. Clearly, the ring cannot be good for the person who owns it.

Now, we see the hero pushed into position for the story to spring into action: Frodo inherits Bilbo’s ring when Bilbo leaves for his permanent holiday. The story’s problem has arrived in the hands of the hero. Finally, the rest of the stakes are revealed as Gandalf tells Frodo that the ring must never fall back into Sauron’s hands. If it does, there will be a “second darkness” while Sauron dominates Middle Earth. Frodo intends simply to hide the ring in a dark cupboard and forget about it, but that line of thought only lasts until the 1st Game Changing Moment.

Gollum is captured by Sauron, and he is tortured for information about the ring. In immense pain, he utters two shrieks: “SHIRE!!! BAGGINS!!!” Sauron dispatches the Black Riders to reclaim the ring. If Frodo merely hides it at home, it will be found.

Frodo is irresistibly flung into the story. He cannot do nothing anymore. He must react. Each action he takes serves to keep him one step ahead of the pursuing Black Riders. When a Black Rider almost catches him on the back roads of the Shire, he takes the ferry to Bree. When the Black Riders find him there, he escapes to Weathertop. When the Black Riders come within a hairsbreadth of him on Weathertop, he is rescued and taken to Rivendell, finally reaching safety at the end of the long string of reactions that characterised this phase of the story.

This is the Council of Elrond—the grand midpoint of the story. Here the hero learns what must be done to defeat the villain: Frodo learns that the ring must be cast into Mount Doom. Frodo now has the information he needs to leave the reactive phase and enter the proactive phase, and as the Council of Elrond climaxes, Frodo says the most proactive words he possibly could: “I will take the ring to Mordor.” And on that grand signal, we launch into the third act.

Frodo leads the way as the Fellowship depart for Mount Doom. He also makes the definitive decision of the act. When the Fellowship are trying to climb Mount Caradhras, and Saruman hurls snow down the mountain, blocking their way, there is a decision to be made. Should they continue over the mountain, go round the mountain, or go under the mountain? Gandalf says, “Let the ring bearer decide.” In the proactive phase, the biggest decision falls to Frodo—the hero.

His decision dictates the locations and challenges the Fellowship then face. They pass through Moria, lose Gandalf, arrive in Lothlorien, and finally set off down the Anduin River.

The hero is now presented with the information that pushes him into the final act. Frodo learns of two terrible dangers to the ring: The ring has corrupted Boromir, enticing him to try to take the ring from Frodo; and Saruman’s Uruk-Hai have caught up with the Fellowship, intent on capturing the ring for Saruman from whom Sauron would soon take it back.

Since The Fellowship of the Ring is the first instalment in a trilogy, Frodo doesn’t use the information he gained in the 3rd Game Changing Moment to complete his fight against the villain, as he would in a stand-alone story. However, that doesn’t make The Fellowship of the Ring any worse of an example. Frodo still uses the information he gained to bring the story to its close. He makes the final, most enormous decision of the story—to break with the Fellowship—and he takes the climactic action of the story—fleeing from the Uruk-Hai down to the river’s edge, escaping by boat to the far side of the river, and carrying on his quest alone (except, of course, for Samwise the Brave).

Now I really want to write!

Seeing one of my favourite stories follow this brilliantly practical 4-Act story structure makes me excited to follow it myself and achieve all the story elements that comprise tales as epic and enjoyable as The Fellowship of the Ring.

But if you’d like some entertainment instead, let me present Glimpses—my free book of short stories.