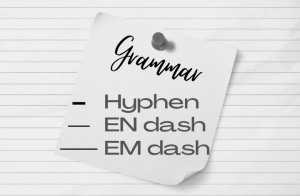 There a three punctuation marks that look like a dash:

These are used to create compound words like ‘twenty-three’ and ‘four-legged’.

I’m sure we all know how to type them: one press of the hyphen key.

These guys, which are also known as short dashes, are the same length as a capital N.

They’re used to indicate intervals, essentially replacing the word ‘to’.

Most word processors, including Microsoft Word, can create EN dashes in a clever way. Just follow these steps:

1) Type the word or number you want before the EN dash.

5) Type the word or number you want after the EN dash.

The hyphen you typed at step three should transform into an EN dash.

If this process didn’t work for you, read the section at the end of this blog.

These guys are named for the same reason as EN dashes. They’re the same length as a capital M. They’re also known as long dashes.

These guys do all the jobs I explained in my most recent blog post.

They’re typed with a similar process to EN dashes:

1) Type the word you want before the EM dash.

3) Type the word you want after the EM dash.

Those two hyphens you typed in step two should merge into one long dash. Yet again, if this process didn’t work for you, read the section at the end of this blog.

A trouble with spaces

A hyphen never has spaces between it and the words on either side.

An EN dash always has a single space on either side. (The spaces are included in the method for typing EN dashes.)

An EM dash does not usually have spaces on either side. (There are no spaces included in the method for typing them.) If you’re writing news, however, you should know that the style guide for the Associated Press does dictate a space before and after the EM dash.

The ‘section at the end of this blog’

If the previous methods for typing EN and EM dashes worked for you, you can stop reading right now. If they failed, however, here are some alternative methods I’ve used on a Mac and an HP.

In Microsoft Word on any computer, you can also click ‘Insert’ on the menu, then ‘Symbol’, then ‘More Symbols…’, then ‘Special Characters’, then select the dash you want.

If everything so far has failed and you’re still reading, I have some final comforting words. Everyone can still tell which punctuation mark is which because…