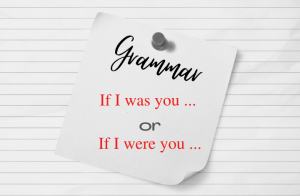 If I was you, I’d keep reading.

If I were you, I’d keep reading.

But is that really correct? Which is it?

A few days ago, a friend of mine asked me to write a blog, answering that dilemma. For that specific phrase—if I was/were you—I can give a simple answer. It should be “were”. But I wanted to discover an equally simple solution for making the correct choice with any other similar phrase—any phrase that starts with “if” and then assaults you with a was/were dilemma.

Now that we know to use “were” with hypothetical or unreal phrases, all we need to know is when we’ve got one of those phrases on our hands. If a sentence contains a phrase like “if I were you”, try following that sentence up by saying something like “but I’m not you”. If that follow up statement is true, you know you’re dealing with the hypothetical or unreal. Let’s give this a try.

If grass were red, it would look like the whole world was on fire. But grass is not red.

If this restaurant were better, I’d eat here more often. But it’s not better.

If I were on holiday, I’d be reading my book. But I’m not on holiday.

If I was rude, I apologise. But I wasn’t rude.

The follow-up phrase isn’t definitely true. In fact, the point of the sentence is that the speaker is uncertain about whether they were rude. Because the speaker was uncertain, “was” is the correct word. Following is another example of a correct use of “was”:

If I was unclear yesterday, I’d happily explain myself again.

Yet again, we cannot follow that up with “but I wasn’t unclear”. Indeed, that would, yet again, defeat the purpose of the statement. And therefore, “was” is the correct word.

That little technique covers most of the was/were dilemmas out there, but there are a couple of situations it doesn’t account for. Both of them deal with statements in which one thing causes, or allows, or leads to another. Take a look at these two examples:

If we were to win the championship final, we’d be permanently ecstatic for a month.

If I was cooking dinner, Mum would take an evening stroll.

“Were” belongs to hypothetical or unreal phrases. These can be identified with a simple follow-up statement, like this:

When “was” in the correct word, that follow-up statement fails, like this:

Finally, in sentences where one thing is said to cause, allow, or lead to another, use “were” if the sentence is about the future:

If something were to happen to him, I don’t know what I’d do.

And use “was” if it’s about the past:

And, as I’m sure you know only too well, next Friday is Christmas Day. Now, if I were Christmas Day, I’d want Matthew’s undivided attention. At the time when he’s usually publishing his blog, I’d want him to be stuffing his face with Christmas delicacies. So, I’d like to extend my warmest wishes to you right now, saying, “Have yourself a merry little Christmas. Let you heart be light. From now on, your was/were troubles will be out of sight.”

Merry Christmas! Until we meet again in 2021.